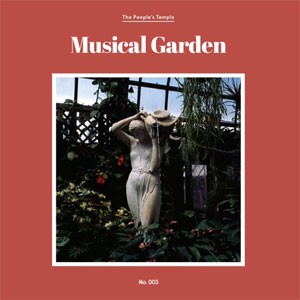 "So at this point, the Lansing, MI band, People's Temple, are pretty much an institution here at HoZac, and their anxiously awaited third LP is finally here and ready for you to sink your teeth into. Not necessarily an album formed in pre-conceived theme, akin to their debut, and More For the Masses, but similar to how the Rolling Stones' Between The Buttons or The Seeds' Fallin' Off The Edge albums represented a collective of songs put together with vasty different styles, due to the sheer abundance of material, yet an impressively cohesive arrangement of their always expanding strains of rock'n roll. With 'Musical Garden,' the band shows no signs of slowing down in their increasingly dynamic range of songwriting, bridging across various sonic experiments with textures through their effortlessly effective delivery, and their increasingly apparent studio prowess, which shines even brighter on this explosive new full length.

Both sets of brothers in People's Temple are integrally active in the songwriting process, and there are more than a few curveballs in this new album. The game-changing 'Male Secretary,' almost unrecognizable compared to the bulk to the PT output, throbs forward as a sizzling slab of gnarly, progressively fuzzed-out glam rock, meticulously built around an atypical song structure that deftly challenges the boundaries of their contemporaries. And with the recent 21 year-old status reached by the band's youngest member George, they quickly proved that they didn't even have to play the "teenage band" card over the past few years to garner any attention they rightful deserved in the first place. After your initial listen to 'Musical Garden,' it will be painfully apparent that this band has nowhere to go but up, and this unflinching and bombastic third LP is their inevitable next step in solidifying their status as one of the Midwest's brightest examples of exciting underground rock'n roll." - VictimofTime.com