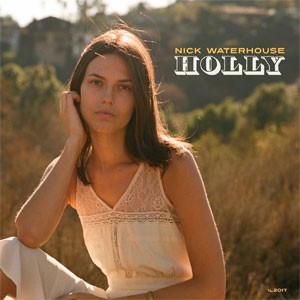 Nick Waterhouse’s art springs from a simple idea: everybody wants to be somebody else. One of his heroes, Van Morrison, got his start covering Bobby Bland, whose own musical idol was Nat “King” Cole. In Waterhouse’s view, emulation is a journey; you never truly succeed, but as the singer, guitarist and songwriter puts it, “You become something on the way there.”

Nick was born in 1986 and grew up in Huntington Beach, known predominantly for UFC, commercial surf culture, and tanning salons. He established his musical sensibilities in the middle of the burgeoning southern California Psych-Garage scene (Burger Records, Ty Segall, McHugh’s Distillery studio). Waterhouse explored the idea of potential on his breakthrough single, “Some Place,” a beautifully lean, propulsive track recorded at all-analog studio the Distillery and self-released in 2010 on his own Pres label.

It’s clear from this material that Waterhouse is in the midst of his own becoming. He isn’t the type to let ecstasy take over, like Van Morrison, or to drawl away in a consummately laid-back register, like Mose Allison. In the tension between his wry lyrics and crisp arrangements, you hear the expression of a worldly skeptic who’s also—when it comes to his art—a sanctified believer. Whoever it was that Nick Waterhouse wanted to be matters less now; these days, he just sounds like himself.

“Think music ain’t what it used to be? Then you haven’t heard Nick Waterhouse. His jumped-up take on 1950’s rhythm ‘n’ blues is the real deal.” GQ

"A timeless talent for spirited rock and rhythms that anyone can appreciate. He draws from the classic sound of ‘50’s American pop with a distinctive voice of his own, shouting and growling with infectious vigor.” NPR

"The music sounds like a party in full swing, each instrument playing exactly what is needed.” CHICAGO TRIBUNE