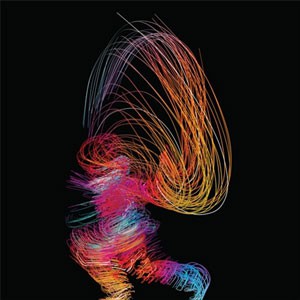 Designed by Matt Pyke of Universal Everything, the release consists of a deluxe one sided, screen-printed heavyweight 180g vinyl pressing featuring one of four randomly available prints depicting images taken from the exhibition.

Simon Pyke is a Brighton based musician and sound artist. He’s previously released music through Warp and Skam records and toured extensively with electronic musicians including Autechre. Pyke has worked on a range of commercial projects including rebrands for SkyTv, MTV, and S4C Wales, and audio for the launch of the 2012 Olympics logo and MTV music video awards.

Universal Everything are a UK based digital art and design collective who work with a global network of designers, artists, musicians, producers and programmers. Past artworks have been exhibited at MOMA New York, V&A London, Central Academy Of Fine Arts Beijing, Garage Centre for Contemporary Culture Moscow, and La Gaite Lyrique Paris.

Warp have a long relationship with Simon and Matt Pyke, having first released Simon’s music as Freeform 17 years ago (‘Prowl’). Through designing this sleeve, Matt was introduced to Warp and subsequently The Designers Republic, for whom he went on to work. During this time, and since launching Universal Everything, he has designed many Warp record sleeves, plus the Warp.net and original Bleep.com websites.