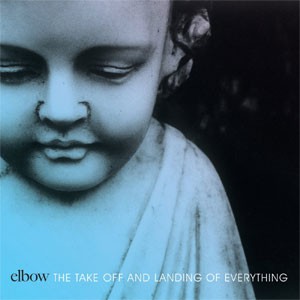 ‘The Take Off and Landing of Everything’ was recorded in Real World Studios and at the band’s facilities at Blueprint Studios, Salford. As with previous albums, the million selling ‘The Seldom Seen Kid’ and platinum follow up ‘build a rocket boys!’ it was produced by the band’s keyboardist Craig Potter. The making of ‘The Take Off and Landing of Everything’ saw the band take a new approach to writing and recording. Previously songs were mostly developed by the band as a whole but this new album sees individual members and subgroups take the lead on several tracks.

‘Honey Sun’ was written and recorded at home by guitarist Mark Potter, his brother Craig wrote the music for ‘Real Life (Angel)’ and bassist Pete Turner built ‘Colour Fields’ using apps on his iPad. The first track to be heard from the album, ‘Fly Boy Blue / Lunette’ was developed by drummer Richard Jupp alongside Pete and Mark whilst both Guy and Craig were away from the studio.

Despite the changes in approach musically and lyrically ‘The Take Off and Landing of Everything’ contains many familiar elements for fans of the band. Early taster ‘Fly Boy Blue / Lunette’ harks back to debut single ‘Newborn’ in its step change melody and rhythmic shift mid song whilst ‘New York Morning’, the first single proper from the album, carries at its centre the type of life affirming refrain that run through elbow songs from ‘Scattered Black and Whites’ from their debut to ‘Open Arms’ from ‘build a rocket boys!’.

Sharp eyed elbow watchers will also note the presence of ‘Charge’, which was performed live during the band’s last run of UK arena shows during the ‘build a rocket boys!’ campaign in December 2012. The song demonstrates that elbow retain an ability to deliver the darker side of human nature that echoes the likes of ‘Little Beast’ and ‘I’ve Got Your Number’ from earlier albums.

Familiar themes return, the welcoming of old friends, the mourning of past loves and, as Guy would say ‘some of the big and little, positive and negative, life experiences that any group of men approaching forty can expect’.