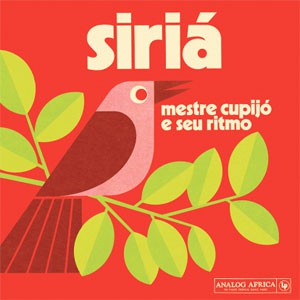 Analog Africa's new release 'Siria' is a collection of carefully selected tracks drawn from the great Mestre Cupijo's six studio albums. Coming from the state of Para in Northern Brazil 'siria' is a cross pollination between the music of the inhabitants of the Quilombos, a Brazilian hinterland settlement founded by escaped slaves of African origins, and the indigenous people of the Amazon rainforest.

It is a breathing, pulsing, emphatic beat, and the modernised version of this local music, created by Mestre Cupijó, has been igniting street parties and traditional festivals across the state of Pará in Northern Brazil for decades.

To grasp the soul of this music, Cupijó went to its source and lived with the quilombolas (maroon) community of the Amazon. Upon his return, enriched by this life-changing experience, he founded the band Jazz Orquestra os Azes do Ritmo with the goal of reinventing siriá and modernising samba de cacete, banguê and other folkloric music of the state of Pará. Airwaves from the Caribbean and Latin America had also brought the cumbia sound of the mighty Colombian orchestras, merengue from the Dominican republic and Cuban music to the Amazon, all of which had an impact on the music of Northern Brazil, mambo especially! Mestre Cupijó took these influences and mixed them in with the ingredients he had studied in the Quilombos. That fusion - as we are witnessing on this record - had explosive effects.

Analog Africa are ferociously proud and honoured to have the chance to present these carefully selected tracks from Mestre Cupijó's six studio albums. They hope that his music captivates you with the magic and bewilderment and they recognise his compositions as true anthems of life and vitality, vibrantly encouraging all to drink and dance until sunrise! Let go of your inhibitions and immerse yourself in the wonderful world of Mestre Cupijó - Segura!