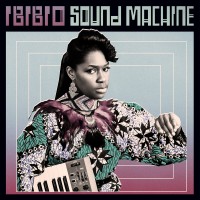 Ibibio Sound Machine finally release their hotly anticipated debut album on the ever brilliant Soundway Records. The self-titled set sees the group effortlessly combine diverse genres with an ease I've not heard since the days of LCD Soundsystem, pulling together elements of West African highlife, disco, post-punk, psychedelic electro soul and nasty ass P-funk. On the squelchy bassed "The Talking Fish" and the 6 Music fave "Let's Dance" and the more traditional highlife cuts "I'm Running", "Uwa The Peacock" and "Woman Of Substance", Ibibio Sound Machine pack the wax with pure effusive energy. Elsewhere, "The Tortoise", "The Talking Fish" and "Prodigal Son" are bursting with raw funk power, with British / Nigerian vocalist Eno Williams in particularly fierce form. Folk stories, recounted to Eno by her family as a child in her mother's South-Eastern Nigerian Ibibio language form the creative lyrical fabric of the album, as can be seen with the natural and proverbial track titles. What I love most about this record is the fact it flows together as an album so well, with a nice progression from highlife to funk and electro disco aided by the excellent musicianship of the players. The album has soul in abundance, bookended as it is by two beautiful spiritual pieces, but will keep the dancefloor just as happy as the congregation. After all, they're pretty much the same aren't they?

A1. Voice Of The Bird (Uyio Inuen)
A2. I'm Running (Nya Fehe)
A3. The Talking Fish (Asem Usem Iyak)
A4. Let’s Dance (Yak Inek Unek)
A5. Uwa The Peacock (Eki Ko Inuen Uwa)
B1. The Tortoise (Nsaha Edem Ikit)
B2. Woman Of Substance (Awuwan Itiaba)
B3. Prodigal Son (Ayen Ake Feheke)
B4. Got To Move, Got To Get Out! (Ana Nkpong Ana Nwuoro)
B5. Ibibio Spiritual