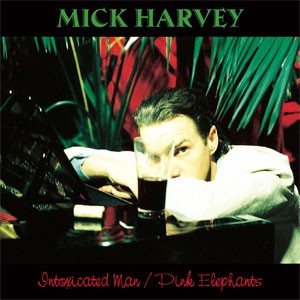 Mick Harvey is set to release a double collection of his two Serge Gainsbourg albums, ‘Intoxicated Man’ and ‘Pink Elephants’, through Mute.

‘Intoxicated Man’ (1995) and ‘Pink Elephants’ (1997) are Mick Harvey’s interpretations of the songs of legendary singer, songwriter and poet Serge Gainsbourg and are the first major works translating Gainsbourg’s influential work from French to English. The collection will include two unreleased tracks, ‘Dr. Jeckyll’ and ‘Run From Happiness’.

Originally Harvey embarked on the project as a result of his own curiosity about the songs and particularly the lyrics. At the time of the original recordings Gainsbourg was little known outside classic works such as ‘Je T’aime… Moi Non Plus’ (‘I Love You… Nor Do I’), ‘Lemon Incest’, ‘Harley Davidson’, ‘Initials B.B.’ and ‘Bonnie & Clyde’. On this collection these classic works are presented alongside some of Gainsbourg’s lesser known compositions.

The reissues follow Mick Harvey’s 2013 album, ‘FOUR (Acts Of Love)’, which was the former Bad Seed and PJ Harvey collaborator’s sixth solo studio album, and the follow up to 2011’s ‘Sketches From The Book Of The Dead’.