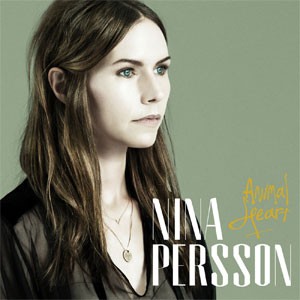 One of Sweden’s biggest, brightest stars as the lead singer for the Cardigans, Nina Persson, releases her first solo album under her own name, the hotly anticipated “Animal Heart. This is the first solo release from Nina, and her first album since she, Niclas Frisk and Nathan Larson released “Colonia” as A Camp in 2009. The Cardigans have not released an album since “Super Extra Gravity” in 2005. “Animal Heart” was written and produced by Nina along with her husband film composer & novelist Nathan Larson (A Camp, Shudder To Think) and Eric D. Johnson (The Shins, Fruit Bats).

“The most difficult and maybe also the best thing about going solo is probably all the decisions you make alone. Somewhere inside, I have a very clear clock, a gut feeling, that says what I think. I have forced myself to just keep going and follow only my gut with this album. I have simply no time to dwell on things anymore which I did a lot before” says Nina.