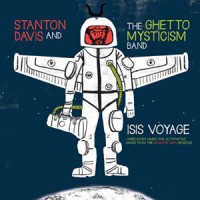 The original spacey jazz-funk sound of the Brighter Days album by Stanton Davis' Ghetto Mysticism Band has been championed by everyone from Gilles Peterson to Andrew Mason of Wax Poetics to hip hop producer and rapper Madlib. Isis Voyage is a collection of unreleased music and alternative mixes from the Brighter Days sessions. Many of the tracks on Brighter Days were shortened to be more accessible to the listening public. Isis Voyage contains the original, longer versions of many of these songs including "High Jazz" and "High Jazz Reprise." Back in October 2012 Stanton Davis and Cultures of Soul Records' label head, Deano Sounds, went into the studio to mix down tracks from the original multitrack reel to reel tapes. Two unreleased tracks, "Odwalla" and the title track "Isis Voyage," were among the material discovered while mixing down the music. Also included are extended instrumental versions of "Things Cannot Stop Forever" and "Funky Fried Tofu." Bonus tracks include remixes of "Things Cannot Stop Forever" and "High Jazz" by UK disco remix expert Al Kent.