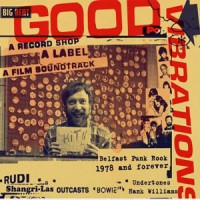 The film Good Vibrations was released late last year to great acclaim, with luminaries such as Roger Daltrey and Bono raving about its excellence. The story follows the turbulent life of record collector, DJ, record shop owner, record label founder and dance promoter Terri Hooley from his childhood to the present day. A true rollercoaster ride with rarely a dull minute, portrayed brilliantly in this cult film. The soundtrack has been woven together by film score composer David Holmes, who grew up listening to our releases, and Terri Hooley himself, whose love of vintage music is the cornerstone of the story.

With musical tastes formed in the 60s and 70s, Terri has chosen some wonderful music to portray his early years. The beauty of ‘Angie’, Bert Jansch’s folk guitar masterpiece, the haunting, sexually charged vocals of the Shangri-Las and the primitive clarity of Hank Williams’ ‘I Saw The Light’ show what an eclectic fellow Terri always was. ‘Outcast’ by the Animals gives a hint of the tougher side of the music eventually leading to Terri’s success and (coincidentally, or possibly not) was also the name of one of his label’s punk bands a dozen years later.

The story of how a scruffy bunch of Londonderry teenagers got their demo to Terri and virtually forced him to record it is one of the film’s highlights. The established record business and a hierarchical society fought against them but boundless energy, belief and desperate measures got a copy of the Undertones ‘Teenage Kicks’ to London-based DJ John Peel who made sure it did not remain an undiscovered gem.

Exciting music of the time from the Saints, Stiff Little Fingers, Niney The Observer and Suicide sit well with the earlier influences of psychedelia from Ramases & Seleka and the rocksteady sound of the Upsetters. Thrown into the imaginative mix are some unclassifiable musical creations from Michael Yonkers, Jason Falkner and the Langley Schools Music Project and of course the label’s top bands Rudi and those Outcasts are well represented. Stand-alone pieces from the film’s soundtrack are included on this musical celebration of a heady era.

Terri provided his own idiosyncratic notes for the booklet and needless to say he was tickled pink to have the great David Bowie singing for him on his CD: ever the fan.

I Saw The Light - Hank Williams
Blood And Fire - Niney (The Observers)
Past, Present And Future - The Shangri-Las
Outcast - The Animals
Freedom Train - The Upsetters
You're A Disease - The Outcasts
Angie - Bert Jansch
Big Time - Rudi
Pear Shaped - Woody Jackson
This Perfect Day - The Saints
Gotta Gettaway - Stiff Little Fingers
Don't Wait Until Tomorrow - Michael Yonkers
Love You - Ramases & Seleka
Teenage Kicks - The Undertones
Dream Baby Dream - Suicide
The Pressure's On - Rudi
I Can Never Go Home Anymore - The Shangri-Las
To Know Him Is To Love Him - The Langley Schools Music Project
Alternative Ulster - Stiff Little Fingers
The Perfect Crime - Jason Falkner
Just Another Teenage Rebel - The Outcasts
Laugh At Me - Holmes Ensemble Aka Whole Ensemble
Star - David Bowie
Self Conscious Over You - The Outcasts