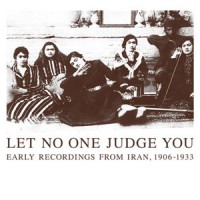 Ravishingly beautiful, achingly precious songs and instrumentals, ranging from two performances by the Royal Court Orchestra in 1906 - with futuristic, overlapping trumpets and exquisite clarinet improvisation - through to a hauntingly soulful Hāfez setting by Moluk Zarrābi of Kāshān, from 1933.

There are eight selections from more than three hundred recordings made in 1909 above the Gramophone Company offices in City Road, London EC1, by the Persian Concert Party. Unrest at home had compelled the group to travel in order to record, paying its way with shows in Baku, Constantinople, Vienna and Paris. Its music is a striking, experimental combination of European and Iranian elements, impressionistic and exotic, with chimes, castanets and rattles. There is an arrangement of traditional Persian music for pipe-organ; and rueful, imploring, besotted love-songs. ‘I am crazy with envy of the dress asleep in your arms and the oils rubbed into your skin.’

A setting of Rāheb’s poetry by Moluk Zarrābi is drawn from 136 titles recorded at 1925 sessions in Tehran, when Iranian women were for the first time concertedly accepted as serious professional musicians, without the connotation of prostitution. Such was the social stigma borne by musicians, especially female, several of our singers hid their identities behind partial or assumed names. ‘Parvāneh’, for example, ‘Butterfly’ - represented by her interpretations of Sa‘di and Hāfez, with self-accompaniment on setar, a three-stringed lute (‘seh’, three; ‘tar’, string), Iranian ancestor of the Indian sitar: ‘I am the slave of love…’ And Helen, with some boozy Hāfez wisdom: ‘Keep your cards close to your chest. Kiss nothing except the lips of your beloved and the rim of a cup of wine. Let no one judge you.’

Moluk Zarrābi - together with Qamar-ol-Moluk Vaziri - featured on more than half the 1925 recordings. On her return to the studio the following year, she was accompanied on tar by Mortezā Ney-Dāvud, amongst the country’s most acclaimed musicians and composers of all time, from the Jewish community of Tehran. (It sounds like another stupendously gifted Iranian Jewish musician - Yahyā Zarpamjeh - accompanying Akhtar.) Alongside one of these duets, two of Ney-Dāvud’s solo recordings from the same sessions are instrumental highlights of this epic set, besides a series of staggering improvisations by Abd-ol-Hoseyn Shahnāzi, sublime ney and kamancheh playing by Mehdi Navā’i and the Armenian Hayk, and an anonymous tar solo from the South Caucasus, captured in Tiflis in 1912, red-raw and rocking.

The two CDs are sumptuously presented in a hard-back gatefold sleeve, with a 26-page booklet containing full notes and marvellous photos, on fine-art papers, stitched not stapled. The four 180g LPs are presented in two gatefold sleeves inside a heavy card slipcase, with a 12”-square, 20-page, saddle-stitched booklet on art paper. The music was restored from 78s at Abbey Road studio in London.