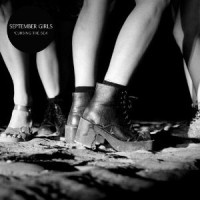 'Cursing The Sea', the debut album from Ireland’s September Girls, is a dark kaleidoscope of echoey drums, buzzsaw bass, angular guitars and reverb-drenched vocals that blends garage rock and post-punk to extraordinary effect. Named after a Big Star song via The Bangles, September Girls are comprised of Paula (Bass/Vocals), Caoimhe (Guitar/Vocals), Lauren (Keys/Vocals), Jessie (Guitar/Vocals) and Sarah (Drums). Drawing inspiration from the likes of Phil Spector, The Velvet Underground, The Cure, My Bloody Valentine and The Jesus And Mary Chain, the five-piece play reverb-soaked noise-pop of the finest order, with distant layered harmonies, swirling organ and distorted guitars once described as "sounds from a transistor radio abandoned in a rural cinema."

Formed in Dublin in 2011, the band quickly recorded some demos and began booking gigs in Ireland and the UK, before releasing a handful of well-received limited edition singles on various cassette and 7” labels around the world, most recently on the Haus of PINS cassette label run by their kindred spirits PINS, with whom the band have also toured. This release, for the song “Ships”, gave the band their biggest press to date, with a glowing review on Pitchfork. With four different songwriters and singers, each song begins with a secret life of its own, only to be unified by the distortion-drenched harmonies and hazy pop stylings of the band, songs that often seem to be of a sunny disposition taking on a darker, more sinister edge.

First single proper “Heartbeats” is a tale of unrequited love and betrayal, awash with fuzzy guitars, ethereal female vocals and entrancing melodies and underpinned by a hurt that catches the back of your throat, while the remarkable pop song that is “Green Eyed” has the protagonist trapped in a relationship with someone untrustworthy. Elsewhere “Sister” deals with the thorny subject of rape and victim-blaming in society over an insistent, urgent backing. Title track Cursing the Sea is an ode to long distance heartache and an apt title for the album, with many of the songs dealing with distance, insecurity and inner turmoil, and alluding to an overall sense of being adrift. In keeping with this, the band chose the setting of a beach at night for the artwork, hoping to capture that same unsettled feeling. Whirling around in a tornado of fuzz, dazzling harmonies, disarming lyrics and dizzying excitement, Cursing the Sea is awash with enough attitude and great songs to see September Girls safely to shore.

“"Ships" takes their fuzzy garage pop and colors it several shades darker, resulting in an ominous amphetamine-fueled dirge full of screeching guitars, metronomic basslines, and cooly detached vocals. The Girls' pare down their sound to its steely core on "Ships", using angular guitar work to sharpen their sunniest melodies to a bleeding point, making this the most thrilling music they've released in their short existence.” (Pitchfork)