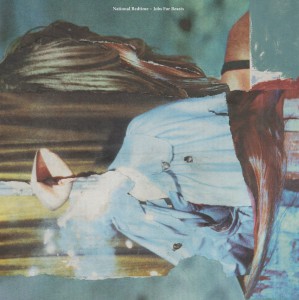 National Bedtime is the latest and most personal vision from acclaimed Glasgow-based artist Tony Swain and friends. Here Swain puts down his brushes and craft-knife and dons the hat of eloquent guitarist and arranger. The album, over three years in the making, contains ten instrumental tracks with Swain's guitar playing as the constant. What varies is the settings, which swing from country to lounge to jazz and further, into hew hybrid forms, which combine the classic jazz trio with turntables, samples and electronics. The samples here are not used crassly or karaoke like: Swains painterly sleight of hand collages and layers his samples, like old newspaper fragments, to invoke the texture and scent of another place, another time. An imaginary backing band. At the heart of this artist's record, perhaps unusually for the genre, is a deeply musical, warm and approachable encounter. Shadazz is a Glasgow based label run by filmmaker / artist Luke Fowler. This is their 13th release. Other releases include the debut single for Django Django, debut CD by Lee Patterson, debut single by Danny Saunders (Correcto) and also music and films by Mark Leckey, Optimo, James Seenan, Torsten Lauchmann, Rude Pravo, Vernon and Burns, Lied Music, Xentos Jones, Bohman Brothers and many more.

A1. The Left Alone Leave Alone
A2. Active Puzzles
A3. Divine Agent On Fire
A4. The Toy River
A5. To Get Is Opposite Got
B1. The Bathwater Carried Away My Hat
B2. Brave By Two-Thirty
B3. Walden Stadium
B4. Scenes Of Note
B5. Hurry Forward

SeahawksAdventures In The Land Of Woo