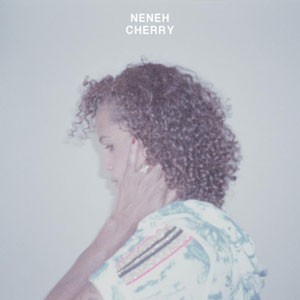 Neneh Cherry releases her first solo album in 16 years - a collaboration with RocketNumberNine, produced by Four Tet, and featuring a guest appearance by Robyn. The 10-track album, recorded and mixed over a five-day period is, out on Smalltown Supersound. It follows 2012’s 'The Cherry Thing', a collaborative record with free jazz, noise collective The Thing, which featured new versions of songs by The Stooges, MF Doom, Ornette Coleman, amongst others.

While her energy and demeanor may not have changed since the days of Rip Rig + Panic, musically, 'Blank Project' is a departure from anything Neneh has previously done, initially written as a means of working through personal tragedy. What stands out upon first listen is the album’s sparseness: loose drums and a few synthesizers are the only accompaniment to Neneh’s wildly poetic, sometimes-spoken, sometimes-screeching, soul-flooded and raw vocals. The space created by this minimal aesthetic leaves room for occasional pistes and flurries of rapid, yet throbbing and thunderous instrumentation. Featuring combined elements of beat poetry, avant-electronica and beautiful vocal melodies, it’s a record that uses simple ideas to create something entirely original. And despite the personal struggles Neneh was working through in writing this new material, the songs are far from introverted.

With 'Blank Project', Neneh continues to arrive at moments in musical history when there is an opportunity to subvert ideas of popular culture. She is subverting once again, only this time, although this record is musically bold, Neneh sees the stasis she’s challenging isn’t musical or societal, but her own.

Philippa says: Neneh Cherry follows her collaboration with Nordic free jazz noise collective the Thing with the intense electro-percussive album ‘Blank Project’, first unveiled at the Manchester International Festival. The guttural analogue synths and pummelled kit drumming of power duo RocketNumberNine (brothers Ben and Tom Page) provide the backing for Cherry’s distinctive emotionally vulnerable soul-flooded vocals, while Four Tet’s Kieran Hebden proves to be the perfect producer for the project, stripping tracks back to their essential elements. The first solo record Cherry has made since the death of her mother, ‘Blank Project’ is stark, bracing, brooding and reflective. There is anger and sadness here, but this isn’t a sad record. This is a life-affirming angry howl at the world, a cathartic blast of intensity that leaps from the speakers. In an era of often soulless synthetic emoting, it’s good to have some raw emotion back with us. Raw like, er, Cherry!