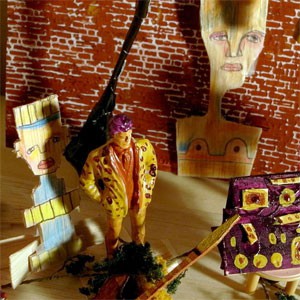 Following the release of ‘The Best of the Howling Hex’ on Drag City in February and Blumberg’s Hagerty-produced debut as Hebronix, ‘Unreal’ (ATP Recordings) in the summer, Daniel and Neil locked themselves in a studio in Denver to create this special edition 7” single. Sharing vocal duties and lead guitar, and also working together on the release's accompanying artwork, this new collaboration brings together two truly original talents.

Whether as part of Pussy Galore, Royal Trux, The Howling Hex or solo, Neil Hagerty has produced some of the most unique and enduring records in American music, while 23 year-old Blumberg has already released five distinct albums under different names and various labels and continues to forge a consistently intriguing and evolving path.

Blumberg and Hagerty complement each other perfectly. Blumberg’s 'Bad Days' is of a piece with the Hebronix album but is even more immediate, with the musician at his melodic best. Hagerty’s ‘Eve's Child’ will delight all Trux and Hex fans and will be covered on the forthcoming Black Bananas album—the first time Jennifer Herrema and Neil Hagerty have collaborated since the end of Royal Trux.

The limited edition 7" is presented in a beautiful package with exclusive artwork which was also a collaboration between the two. Daniel’s distinctive drawings can be seen amongst Neil's wooden sculptures.Each track features Denver noise musician Charles Ballas who has previously recorded and played live with both artists.