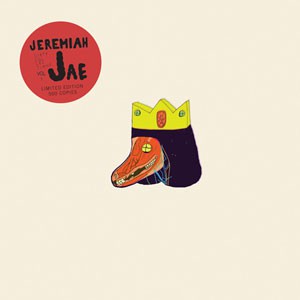 Following the success of his mixtape, Jae is now set to release his ‘Dirty Collections’ 7”s, a series of three 7” singles, each customized with Jae’s own sketches / drawings.

Imagine the crate-digging of Madlib merged with the crash experimentalism of Aphex, the dream-telling feel of a Flying Lotus record, and the quirky and haunting imagery of vintage David Lynch. That, all bound with a sense of universal truth a la Sun Ra and Lil’ Wayne’s stream-of-consciousness abandon” - Resident Advisor

In 2007 Jeremiah Jae was noticed by producer Samiyam, who passed on his ‘Lunch Special Part 1’ to Flying Lotus. Not long after, Jae was flown to LA to work with FLyLo and was signed to Brainfeeder where he released his 1st EP and album.

This year, Jeremiah Jae signed to Warp and released his ‘Bad Jokes’ mixtape, which sent waves over the online music community from tastemakers like Pitchfork to the hip hop savants at SBTV and rapidly climbed the ‘dat piff’ chart in 24 hours.

Mentor Flying Lotus (aka Captain Murphy) has included his track ‘Evil Grin’, which was produced by Jeremiah Jae, on the biggest ever game release, ‘Grand Theft Auto 5’ (on the Fly Lo FM channel).