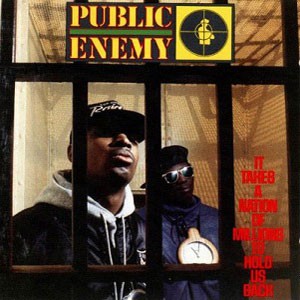 'Yo! Bum Rush The Show' was an invigorating record, but it looks like child's play compared to its monumental sequel, 'It Takes a Nation of Millions to Hold Us Back', a record that rewrote the rules of what hip-hop could do. That's not to say the album is without precedent, since what's particularly ingenious about the album is how it reconfigures things that came before into a startling, fresh, modern sound. Public Enemy used the template Run DMC created of a rap crew as a rock band, then brought in elements of free jazz, hard funk, even musique concrète, via their producing team, the Bomb Squad, creating a dense, ferocious sound unlike anything that came before. This coincided with a breakthrough in Chuck D's writing, both in his themes and lyrics. It's not that Chuck D was smarter or more ambitious than his contemporaries - certainly, KRS-One tackled many similar sociopolitical tracts, while Rakim had a greater flow - but he marshaled considerable revolutionary force, clear vision, and a boundless vocabulary to create galvanizing, logical arguments that were undeniable in their strength. They only gained strength from Flavor Flav's frenzied jokes, which provided a needed contrast. What's amazing is how the words and music become intertwined, gaining strength from each other. Though this music is certainly a representation of its time, it hasn't dated at all. It set a standard that few could touch then, and even fewer have attempted to meet since.

Eric B & RakimPaid In Full - Back To Black Edition