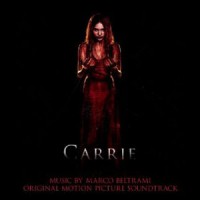 Carrie is the 2013 remake of the classic horror tale about Carrie White, a shy girl who is outcast by her peers and sheltered by her deeply religious mother. Carrie unleashes telekinetic terror on her small town after being pushed too far at her senior prom.

Based on the best-selling novel by Stephen King, Carrie is directed by Kimberly Peirce with a screenplay by Lawrence D. Cohen and Roberto Aguirre-Sacasa, with top actresses Chloë Grace Moretz and Julianne Moore signing for the lead roles.

The haunting classical score by Marco Beltrami vividly accompanies the eerie and terrifying scenes of the film. The dynamic soundtrack is wonderfully suited for a vinyl issue, making this without a doubt an audiophile collectible.