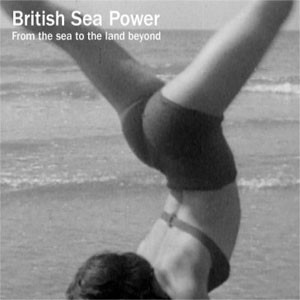 British Sea Power’s widely-praised soundtrack for the film ‘From The Sea To The Land Beyond’ is to be released on CD and double vinyl (plus digital download coupon) accompanied by a DVD copy of the film through Rough Trade Records.

The album features a bonus track not available on the original soundtrack. · The soundtrack consists of re-workings of previous British Sea Power songs and was recorded in Brighton and mixed by Ken Thomas (Sigur Ros, Daughter, M83, Cocteau Twins, Moby).

In January 2013 when the film, directed by Penny Woolcock, was first shown on BBC4 as part of the ‘Storyville’ series the viewing figure nudged 500,000 - over twice the usual audience size.

The film features a fantastic array of footage of the British coastline from the BFI’s National Archive. Travelling from 1901, through both World Wars, into peacetime and the modern age, ‘From The Sea To The Land Beyond’ shows our coast as a place of leisure, industry and wild nature: A woman scaling a sheer cliff face to collect eggs, dancers on the Sussex shoreline, émigrés from the Caribbean and India, a big British Rail hovercraft... For all this, the British Sea Power soundtrack is a fitting, moving audio counterpart.