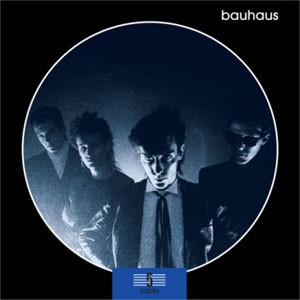 ‘In The Flat Field’ (Re-mastered in 2008): Few debut albums ever arrived so nearly perfectly formed. That ‘In The Flat Field’ practically single-handedly invented what remains for many as the stereotype of goth music - wracked, at times spindly vocals about despair and desolation of many kinds, sung over mysterious and moody music - demonstrates the sui generis power of both the band and its work. This said, perhaps the best thing about the album isn’t what it’s supposed to sound like, but what it actually does - an awesomely powerful, glam-inspired rock band firing on all fours, capable of restraint and complete overdrive, fronted by a charismatic, storming frontman. ‘In The Flat Field’ started off Bauhaus’ album career with a near-perfect bang.

‘Mask’ (Re-mastered in 2008): Managing the sometimes hard-to-negotiate trick of expanding their sound while retaining all the qualities which got them attention to begin with, on ‘Mask’ the members of Bauhaus consciously stretched themselves into newer areas of music and performance, resulting in an album that was arguably even better than the band’s almost flawless debut. More familiar sides of the band were apparent from the get-go - opening number ‘Hair Of The Dog’, one of the band’s best songs, starts with a double-tracked squalling guitar solo before turning into a stomping, surging flow. The energy wasn’t all just explosive angst and despair, though. The one-two punches of ‘Kick In The Eye’ and ‘In Fear Of Fear’ have as much hip-shaking groove and upbeat swing to them as portentous gloom. Elsewhere, numerous flashes of the band’s quirky sense of humour - something often missed by both fanatical followers and negative critics alike - make an appearance. Add to that three of the most dramatic things the band ever recorded - the charging, keyboard-accompanied ‘The Passion Of Lovers’, the slow, dark fairy-tale-gone-wrong ‘Hollow Hills’, and the wracked, trudging title track, where the sudden appearance of an acoustic guitar turns a great song into a near-perfect blend of ugliness and sheer beauty - and the end result was a perfect trouncing of the sophomore-slump myth.

‘The Sky’s Gone Out’ (Re-mastered in 2013): More fragmented in origin than it might appear on first glance (the lead off track, a phenomenal, nuclear-strength rip through Brian Eno’s ‘Third Uncle’, featuring some fantastic soloing from Ash, came from a BBC radio session performance), ‘The Sky’s Gone Out’ was caught between the expectations of an audience now thoroughly embracing the incipient goth genre, with all the built-in limitations such expectations often provide, and a band which wanted to please them while still following its own muse. ‘The Sky’s Gone Out’ feels more like a compilation than anything else. Piece by piece, though, the songs still often showed Bauhaus in excelsis.

‘Burning From The Inside’ (Re-mastered in 2013): ‘Burning From The Inside’ really was a collection of various recordings, due in large part to outside events - Murphy had fallen victim to a life-threatening illness, so the rest of the band began recording without him, which more than anything else foreshadowed both Bauhaus’ breakup and the trio’s future work as Love And Rockets. As a result, two songs ended up on the album, the piano led cinematic moodiness of ‘Who Killed Mr. Moonlight’ and the sweet acoustic drive of ‘Slice Of Life’, with David J and Ash on lead vocals respectively. The end result of all this was an album that was good in spots but not as strong throughout as it could be, while betraying the other performing and writing strains that would soon cause the band to call it a day. As before, though, when the band members were on, they were on with a vengeance, such as the medieval folk dance ‘King Volcano’ and the starkly beautiful ‘Kingdom’s Coming’.

‘Singles’: A compilation of the non album singles (excluding BBC recordings), this re-mastered set also included the first official release of the rare cover of ‘Spirit In The Sky’ (originally featured on an ultra rare, fan club only single) and the live-with-studio-vocals version of ‘Bela Lugosi’s Dead’.

We Have BandTernion - Limited 2CD Edition