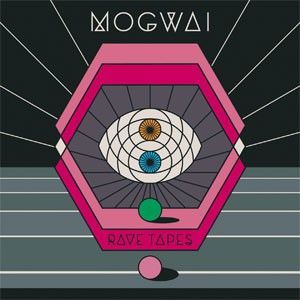 Rave Tapes is the eighth studio album by Mogwai and their second on Rock Action, the label they set up almost 18 years ago to issue their debut 7" single, Tuner/Lower. In between, the Scottish quintet have established themselves on the international stage through a prolific recorded output and a commitment to touring that few of their peers can match.

Clocking in at just under 50 minutes, the 10-track album is a lustrous collection mined from the same quarry as its predecessors, wreathed in painterly textures underpinned by increasingly electronic beats. The haunted strains of Deesh channel the slow-burning ecstasy of their 2006 song “Auto Rock” (a key presence in the denouement of Michael Mann’s film of Miami Vice that year) while the guitars on which Mogwai built their reputation remain, if for the most part less overtly belligerent this time round, as evidenced by the somnambulant opener “Heard About You Last Night” and the sonic scowl of “Hexon Bogon”. With Rave Tapes, Mogwai’s mastery of sound and space is firmly at its apex.

Barry says: Mogwai, Veteran post-rockers and noise merchants ramp it up in this latest iteration, with synths! Pulsing, brooding and mysterious, and juxtaposed with their trademark melodic highs. Groovy, imaginative, and downright brilliant. Post-rock for the 21st century.