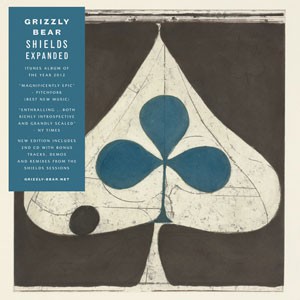 ‘Shields Expanded’ is a two disc CD set and 18 track digital album which features the original ‘Shields’ record along with the eight additional B-Sides.

‘Shields B-Sides’ features 5 never before heard tracks, three of which are demos recorded in Marfa, Texas before the band officially began track listing the album in New York and Cape Cod. The Marfa Demos include the hypnotizing new single ‘Will Call’s’ plus ‘Taken Down’ and ‘Everyone I Know’ as well as two beautifully constructed bonus tracks, ‘Smothering Green’ and ‘Listen and Wait’. The ‘B-Sides’ also includes three remarkable remixes of tracks from the original ‘Shields’ including the Nicholas Jaar remix of ‘Sleeping Ute’ (which was released as a limited edition 12’’ for Record Store Day earlier this year) the Liars Remix of ‘A Simple Answer’ and Lindstrom Remix of ‘Gun-Shy’.