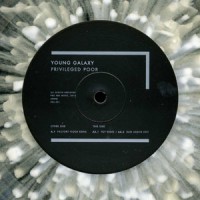 Young Galaxy’s ‘Privileged Poor’ is taken from the Polaris Music Prize short-listed album 'Ultramarine'. Factory Floor's remix comes hot on the heels of the band’s acclaimed debut album on DFA, and has similar sound designs. Their mix strips away the vocals, pads and pop touches, leaving us with a taut, driving analogue techno / house number. If you didn't know it was a remix you would think it was one of Factory Floor's own tracks. TOY’s Dom and Ale continue to emerge as world class remixers as they transform 'Privileged Poor' into a hypnotic, motorik psychedelic freak out. While less synthy than the original, Dan Lissvik keeps the pop edges of the original and an extra bump for the dancefloor.