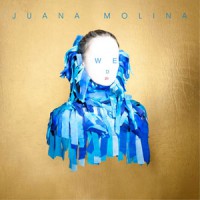 ‘Wed 21’ by the bewitching Juana Molina, sees all the various threads she’s previously explored masterfully woven together with new elements. She creates a mischievous, playful, joyous series of songs, brimming with surprises.

Juana Molina has been acclaimed as a deeply original and visionary artist who, “like Brian Wilson or Kevin Shields, pulls off the most out-there material with melodies nearly as accessible as conventional pop” (Rolling Stone). She has variously been described as “pure genius” (Les Inrockuptibles, France), “beguiling” (Pitchfork), and is said to be “one of the most extraordinary singers around” (Sunday Times), who is “creating a slippery soundtrack for the subconscious” (Spin, US) and “subtle, unclassifiable sonic magic” (Uncut). On her previous albums, Juana Molina deliberately used a defined, minimal array of elements (mostly guitar and layers of vocals, with some synth and percussion) to compose pieces which have gradually moved from folky acoustic songs to mesmerizing, “gorgeous reveries... [and] radiant clouds of sound” (the NY Times, about her previous album ‘UnDia’).

This time, she’s remarkably expanded her palette of instruments, incorporating electric guitars, bass, drums and inventive electronics, thus giving ‘Wed 21’ a richer, broader sonic spectrum. In some of the tracks, Juana comes as close to a pop song format and to a full band sound as she ever did...while some other pieces are sinuous excursions through gamuts of feelings and textures. As the album unfolds, each of the eleven songs reveals new, delightful ideas, unexpected turns and inspired atmospheres.