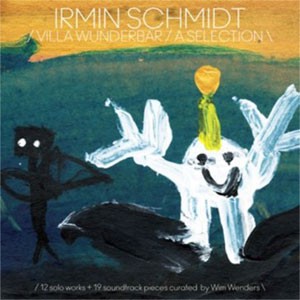 ‘Villa Wunderbar’ is a 2CD (also available as a digital download), compiling the work of Can founder Irmin Schmidt’s solo and soundtrack work, including two unreleased Can remixes and a collection of soundtrack pieces personally compiled by longterm collaborator Wim Wenders.

CD 1 is a compilation of Irmin Schmidt’s extensive work as a solo artist over the past 30 years. It is accompanied by sleevenotes written by the English writer Duncan Fallowell, author of most lyrics on the album, whilst CD 2 (selected and presented by the filmmaker Wim Wenders) is an insight into Schmidt’s vast work as a composer for film and television, for which Wenders has written extensive sleevenotes.

The compilation includes tracks such as ‘Villa Wunderbar’, ‘Kick On The Floods’ and ‘Bohemian Step’, alongside unreleased remixes by Schmidt of two Can tracks, ‘Alice’ and ‘Last Night Sleep’, and an unreleased extract from ‘La Fermosa’, a ballet by Youri Vàmos, entitled Bêtes De Passage.

After an extensive classical education as pianist, conductor and composer, Irmin Schmidt - who studied under Stockhausen and Ligeti - established Can in the late 60s, combining classic new music with rock and jazz. The band’s powerful influence has never diminished, and their indelible mark is apparent in the bands who freely acknowledge their importance, from Portishead, James Murphy, New Order, Factory Floor, Public Image Ltd, Mogwai, Kanye West (who sampled ‘Sing Swan Song’) and Radiohead, as well as across other disciplines such as visual art and literature.