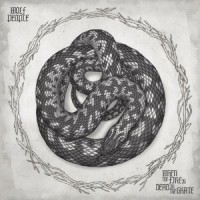 ‘When The Fire Is Dead In The Grate’ has quickly been established as a fan favourite throughout venues during their European tour. Stewart Lee described the song as “the album’s first stone classic, a funky folk-metal workout that trails off into a compellingly extended coda, both guitarists circling and dovetailing and spiralling.”

A brand new track, ‘Become The Ground’, breaks new ground for the band, being, perhaps, their most obviously folk-influenced song to date. It’s a beautiful duet between lead singer Jack Sharp and guest vocalist Nicola Keary before the song breaks into a swirling psychedelic jam.

The B-side of this mini LP is made up of the first track fans heard on ‘Fain’, ‘All Returns’, but now coupled with ‘All Returns Part II’, the song’s original extended outro. It’s Wolf People at their best, locking into a masterful groove, razorsharp guitar lines interlocking and intertwining.

1. When The Fire Is Dead In The Grate
2. Become The Ground
3. All Returns
4. All Returns Part II