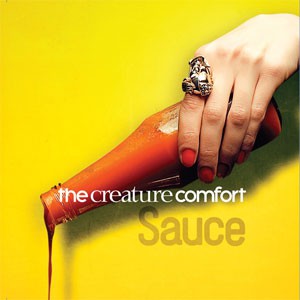 The Creature Comfort make outsider rock music. Citing Nick Cave & The Bad Seeds, Iggy Pop and Pixies as influences, The Creature Comfort take their own beatnik style and existential lyrics, which occasionally lapse into French and surrealism, and weave it into a visceral post-punk sound. Sometimes raw and punk-edged, as with their debut single Sally Sucks. At other times more poppy and tongue-in-cheek, as with second single Sauce, a twist on the old metaphor of unrequited love and food with its opening gambit:

“I want your food, I want your recipe, all the ingredients that you keep from me”.

The Creature Comfort to many are a brand new band. For anyone familiar with the nightlife of Manchester during the ‘Madchester’ heyday of late 80’s-early 90’s will know them as the city’s long lost treasure. They were once managed by Gareth Evans (The Stone Roses) with a residency at legendary music venue, The International. Then, on the cusp of joining the pantheon of break-through acts like Oasis and Elbow, The Creature Comfort were suddenly forced to disband.

Now the original founder and frontman, Ben Le Jeune, has returned to reform the band (with new line-up) to release the first music from The Creature Comfort of the millennium. Following on from Sally Sucks single (a limited run single sold to local fans on their North West tour), the band now brings you second single Sauce.