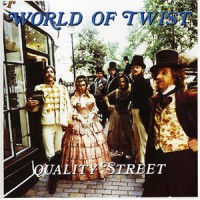 World Of Twist are a deeply revered, respected band and one of the greatest ‘lost’ bands from Manchester. Genius is a moniker often given too easily but in World Of Twist’s case, not nearly enough. They cut through the hazy end of Madchester with a suaveness, a wit and an knowingness showcased by their collection of psychedeliic, soulful, madcap indie pop. It set them apart from anything else at the time – “a Roxy Music for the space age” as Louder Than War put it.

Quality Street, their only album, was released in 1991. It features the singles The Storm, the ecstatic cover of the Stones She’s A Rainbow, Sweets and the legendary Sons Of The Stage.

The band left a mark on many people who have achieved greatness - Jeremy Deller, one of the finest artists the UK has ever produced, included a “We Miss The World Of Twist” float in his work ‘Procession’ at the Manchester International Festival. Noel Gallagher nearly called Oasis Sons Of The Stage and Liam Gallagher’s Beady Eye have covered that track in tribute to a band who influenced them so much. Noel even personally insisted that Jamie Fry, whose photographs grace the album artwork, was used for Oasis shoots.

Andy says: The ones that got away! Absolutely superb, psychedelic soul pop. They dared to be different.

Laura says: It was a case of bad timing for World Of Twist. Although their psychedelic pop was a perfect fit for Manchester at the time, they didn't have the scally / baggy look that the national media and music industry were honing in on and so were largely overlooked. A few years later and things could've been so much different.