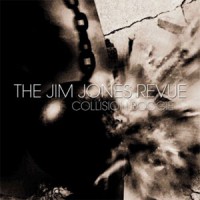 Collision Boogie is the brand new single by The Jim Jones Revue, backed with another new track, ‘Mind Field’, released by Play It Again Sam on 7” and digital download.

Previously unreleased, ‘Collision Boogie’ continues the journey of sonic exploration The Jim Jones Revue embarked on in their critically acclaimed album ‘The Savage Heart’, this time starting in Jamaica and ending up in New Orleans. Jim Jones explains: “‘Collision Boogie’ is a sort of personal user’s guide to some of the things that might come crashing into in life. It was originally inspired from hearing a Jamaican dancehall track blaring out of a car in Hackney; but by the time we had an arrangement together, it ended up with more of a New Orleans flavour.”

‘Collision Boogie’ and ‘Mind Field’ were produced and mixed by Jim Sclavunos (of Grinderman / Nick Cave & The Bad Seeds). Both tracks were recorded at The Chapel in Lincolnshire and mixed at Edwyn Collins’ West Heath Yard Studios in London.

The Jim Jones Revue7 Times Around The Sun

The Jim Jones RevuePrincess And The Frog