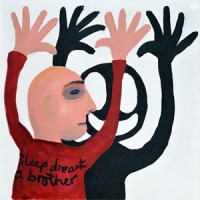 Sleep Dreamt a Brother is the new album from musician and artist Mathew Sawyer, due for release on Fire Records in October. Mournful, lush arrangements that sound almost medieval at times with stark strings, classical guitar and piano overlaid by Sawyer's bare, distinctive vocals and creepy foley sound effects. The record is a place. Not the representation of a place, but something inhabitable. With a clearer vision than his other records, the album is very notably about death. Sawyer wrote and recorded the majority of the album following the loss of three friends a few months apart in 2011 and completed it two weeks before his son was born. As Mathew explains: "When I talk about death or loss I want it to be the feeling itself, not just a representation of that feeling."

Mathew Sawyer is a renowned painter and artist and has a Masters from The Royal College of Art. He has exhibited all over the world (he was The Guardian's artist of the Week and his exhibition at the Rokeby Gallery was previewed in Time Out). He created a painting as cover art for Sleep Dreamt a Brother, which features a man raising his arms with death mirroring this action. They're a reflection of each other. They're brothers. In Greek mythology, Hypnos and Thanatos are brothers. They are Sleep and Death. The title Sleep Dreamt A Brother imagines Sleep dreaming his brother into being. The record views life and death as just a memory or a dream of the other, and tries to reconcile the gap between them. It considers the dream world to be just as valid an experience as the waking world, and that death is like a dream we'll have. Mathew says; "When I die, I'd like to die in the night time as dreaming in sleep is not of this world anyway. Lost in a dream is nothing to be afraid of." The album was recorded and produced by Sawyer at his home. "I like recording to be hand in hand with everyday living. The sound of cars come through the windows, the phone rings, floorboards creak. These sounds all played an important role in making this record. Studios are quiet and lifeless." Although this record is under his own name, previously he has gone by the name of Mathew Sawyer and The Ghosts, and before that just The Ghosts.

1. New Bird To Be
2. Feeeeling
3. Don't Tell The Others What We Were Singing
4. The Forgetting Head
5. October All The Time
6. Sleep Dreamt A Brother
7. Death Is Like A Dream We'll Have
8. Another World
9. The Golden Heart
10. How To Work