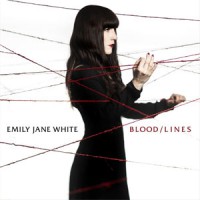 There's a rare confidence to Emily Jane White's songwriting: it's at once generous and tough-minded, reflective and unsentimental. Her work shares some elements with folk music, but the term does not do justice to her ambitious songwriting and robust arrangements. White possesses a singular voice inspired by the raveled threads of the uncanny in American culture, including depression-era blues and classic works of gothic literature such as Toni Morrison's Beloved and Charlotte Perkins Gilman's The Yellow Wallpaper.

Emily's previous two albums were composed of songs written by her but collaboratively arranged with her band prior to recording. "Blood / Lines" is a different, more personal record, one she was free to explore new directions and avenues, though not altogether by herself. The bass tracks were written by Darwin Meiners, the orchestral string by Shawn Alpay, and the drums by Nick Ott. Emily Jane White also feels blessed to have Marissa Nadler's presence on two tracks ('Faster Than The Devil', "Dandelion Daze') . "Blood / Lines" is a fresh, inspiring and somewhat experimental record in terms of song writing, recording and producing.