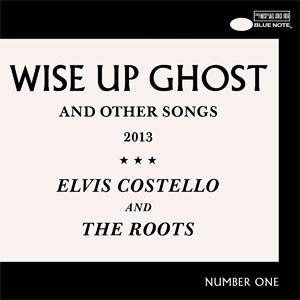 Elvis Costello and The Roots have announced a collaborative album entitled Wise Up Ghost which is exclusively released.

The existence of the record was first revealed by ?uestlove as an aside during an interview with Billboard Magazine in January and a small number of test pressings were distributed as white labels on Record Store Day on the 20th of April. Most of the sessions took place in secret at Feliz Habitat Studios in the dead of night, while others were in plain sight at Costello’s Hookery Crookery Studios.

Elvis described the record as “the shortest distance between here and there” and containing “both rhythm and what is read”. Ahmir says, “It's a moody, brooding affair, cathartic rhythms and dissonant lullabies. I went stark and dark on the music, Elvis went HAM on some ole Ezra Pound shit.”

1.Walk Us Uptown
2.Sugar Won’t Work
3.Refuse To Be Saved
4.Tripwire
5.Stick Out Your Tongue
6.Come The Meantimes
7.(She Might Be A) Grenade
8.Cinco Minutos Con Vos
9.Viceroy’s Row
10.Wise Up Ghost
11.If I Could Believe