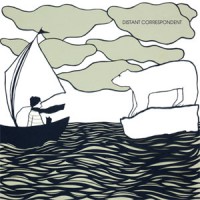 “Nothing but the fall of ashes from which no phoenix can rise,” say Atlantic-straddling outfit Distant Correspondent. The band’s helmed by David Obuchowski (Goes Cube), who recruited Emily Gray (Meanwhile Back in Communist Russia), Michael Lengel, Edith Frost (signed to Drag City) and Tyler Wilcox to what was originally a completely secret project. Their songs were written largely by collaboration, albeit separately – David sent the vocal and guitar parts to Michael, who provided the bass and drum parts. Those tracks have grown and evolved since the addition of the other members, including Oxford-based Emily who added moving lyrics and narrative touches.

The quartet’s first single for Static Caravan, ‘Shatter’, is the first offering from an album they’re releasing in October on Hot Congress/Old Flame Records. It underlines just why they’ve been hotly tipped by websites such as Oh My Rockness and Vice’s Noisey blog. The 7” features two songs of woozy, atmospheric indie rock, combining gentle melancholy with brooding yet beautiful melodies. The Cocteau Twins are an obvious touchstone, but at times the four-piece also recall Red House Painters’ enchanting melancholy and song craft.

Lead track ‘Shatter’ is a bittersweet song whose ethereality and pop hooks dovetail gracefully, in a way reminiscent of Besnard Lakes. Topped with Edith Frost’s fragile, world-weary vocal, it then breaks down into expansive guitar pop propelled by a driving rhythm section and the kind of swirling, dream-like melancholia which reminds of Do Make Say Think, while Emily Gray’s closing monologue is stark and poetic, complementing the song’s epic sheen.‘Badlands’ on the flip is another slice of gauzy dream-pop which wouldn’t have sounded out of place on 4AD in the 1980s and early 1990s, all glistening guitar melody, throbbing bass and hypnotic, interlocking vocals. Its haunting refrain – “Death is not an option that I can afford” - adds to the spectral feel; all these ingredients combine to result in sparse but lilting, summery pop with a hint of darkness underneath the surface. On the evidence of this pair of songs, they’ll be burning brightly for a long time yet.