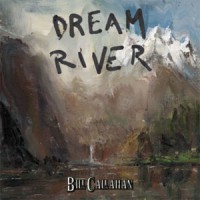 In the song world of Bill Callahan, the present realities tumble ecstatically like cloth in the wind - sheets and flags and clothes. These things borne aloft are not simply physical details in the landscape, but the contours of an emotional one as well. Bill’s a cartographer way out there, tracing the coastlines, telling the tales he has discovered along the way. Some seen in life and others in mind’s eye, they float down ‘Dream River’ with humble eminence.

The river that was once deemed not too much to love, that once freed convicts and their guard in a still and silent moment, is now a ‘Dream River’, fished in a variety of depths, viewed in panorama. This is a waterway that winds across the landmass, a ribbon that touches and changes and feeds and gives to and takes from many lives as it rolls to the ocean.

Dialed into the mindset, the ‘Dream River’ instrumental crew man a hovercraft that bears the songs along, humming deeply with bass and percolating with the abiding resonance of hands drumming on skins, the lively popping of claves. Guitar strums fan into blooms of smoke, sliced through by other guitars taking other forms - shards of mirrors, plumes of ignition, telephone wires, snakes and ladders plunging through the depths of the sky. The musical modes are exquisite, aquatic; shifting in delicate but deliberate undetectable time as Bill’s lyrics wander from yard to yard.

‘Dream River’ is the fourth studio album from Bill Callahan, following the sweet devastation of ‘Apocalypse’.

Patrick says: It's easy to paint Bill Callahan as a world weary traveller. After all, he's fourteen albums into a twenty year career, deadpans with the best of them and has been known to dwell on death and destruction more than a Scandinavian drama. His last offering, 2011's ‘Apocalypse’ sees two protagonists meet their maker before side-B is through, amongst a general discourse on devastation and despair. But if ‘Apocalypse’ was the storm sent to purge the earth, then ‘Dream River’ is the verdant calm that follows. Bill has always explored natural themes, even back in his days as a lo-fi auteur, and on this album they abound. As ever water is the most prominent motif, whether it be a river, ocean or rain, with Bill's warm baritone deep enough to drown in. Elsewhere, flight is the focus as arrows, javelins and seagulls all soar through clear skies adding to the lightness of what is certainly Callahan's most uplifting album to date. But what is most striking about ‘Dream River’ is the happy marriage of Callahan's trademark Americana with soul. Aside from the lyrical nod to Marvin Gaye and Bill's Callier register, the congas and claves of Thor Harris lend a temperate groove to proceedings, while Beth Galiger's flute doffs it's beret towards Brian Jackson, inspired by Gil Scott-Heron covering ‘I'm New Here’. Once again the excellent Matt Kinsey returns to add his psychedelic guitar to the record, magnifying the transportative qualities of "Summer Painter" and "Javelin Unlanding". ‘Dream River’ sees a mature Callahan at his best casting a musical spell that only breaks when the needle hits the centre.