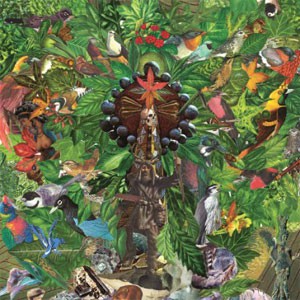 Mahood utilized 6 and 12 string guitars, lap steel, bass, organ, and synth to realize these richly detailed songs. ‘Drifter’s Temple’ harkens back to Mahood’s childhood in Northern California, both sonically and conceptually. A loose narrative is woven through these ten instrumental tracks, touching on the Gold Country and Mt. Shasta that populate his native countryside.

The album unfolds with the grace and contour of the landscape that inspired it, with fingerpicked melodies slowly growing to gigantic peaks of lysergic bliss. His guitar style is as far reaching as ever on ‘Drifter’s Temple’, which shows him seamlessly integrating his love of the Appalacian folk music of Dock Boggs and Roscoe Holcomb into the subtle Grateful Dead-isms, nods to 70s cosmic music, and overt Crazy Horse moves he has explored on recent releases.

Dewey Mahood was a founding member of Eternal Tapestry and has performed in Gärden Söund (with Barn Owl), Edibles, Bloodbiker, and Jackie-O Motherfucker.