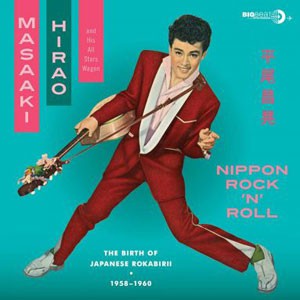 “Nippon Rock’n’Roll” documents the rise of Masaaki Hirao. Dubbed “The Japanese Elvis”, Hirao was one of the famed Rokabirii Sannin Otoko (Three Rockabillies), alongside singers Mickey Curtis and “Kei-chan”, Keijiro Yamashita. In early 1958, the rokabirii buumu (rockabilly boom) was born, the first youth music tribe in the Land Of The Rising Sun.

Rokabirii may resemble US rockabilly, but this Nipponese version is a more varied dish. Hirao and his band’s covers of Eddie Cochran, Elvis Presley and Little Richard are not kitsch renditions, but raw, desperate rockers. Hear a Paul Anka makeover, but put through a rocking mangle; a smattering of jazz; a twist of New Orleans; and some Japanese folk songs with a greased-down quiff. American occupation a distant memory, these boys wanted to party.

Country and hillbilly music was a mainstay of young Japanese musicians working the GI base and jazz café circuit of the 1950s. Following the runaway success of a Japanese cover of ‘Heartbreak Hotel’ (Hirao’s version here has dynamite in its teeth), demand grew for more of this strange, new music. The need was met with a huge gala, the Nichigeki Western Carnival, which showcased the new rokabirii groups to thousands of screaming Japanese teenagers. Wild footage of the concerts, alongside that of burgeoning radical student movements, put fear of a wave of delinquency into the heart of the establishment.

The studio numbers here are hardboiled, with unkempt live recordings that really rock. Tough drums back up honking sax, in a pedal steel pandemonium with slap bass. In the words of Elvis: these guys “get real gone”.