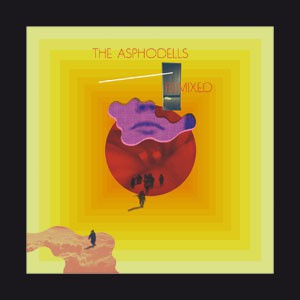 Andrew Weatherall never wakes up in the morning and decides to start a new album that day. Instead, recording music is a continuous process usually working with different collaborators and seeing where the muse takes him. Somewhere down the line the rewards of a collaboration will coalesce into a body of work between thirty minutes and an hour long and he will put a call into the Rotters’ team to say he has a new release ready to go.

We were visiting the studio catching up on new tracks in various states of readiness when he offered up some remixes of tracks from his recent “Ruled By Passion…” he’d been sent by fellow musicians. Tim Fairplay, Andrew’s partner in The Asphodells, Sean Johnston from A Love From Outer Space and Scott Fraser live and work in the area and all popped in at various points.

Andrew’s black book reads like the who’s who of contemporary music but rather than plunder it for remixers he’d let drop the idea of a remix with friends and neighbours. These plus a couple a swaps with musical friends who were new to the concept of remixing, gave Andrew an hour of music he thoroughly enjoyed listening to.

It goes without saying none of the tracks are duds but our ears always prick up when Justin Robertson’s take on “Beglammered” ups the heart rate or Daniel Avery’s own unscrewing of “… the Axis” ruffles the neck hairs. We’ve stopped arguing in the office about which is the best track. They all are.