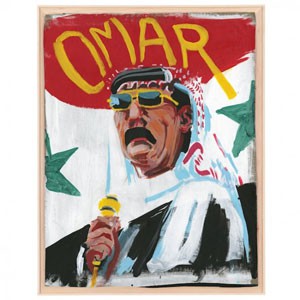 Omar Souleyman - the Syrian artist who not only changed the vibe of weddings throughout the Middle East with his Shaabi street sound but also brought it to the West through his notorious late night festival slots - has finally recorded a proper album. After three compilations and a live release, 'Wenu Wenu' is his first album to be recorded in a studio.

Citing Hebden and Bjork as fans, Souleyman’s audience has expanded, no longer just appealing to those interested in Middle Eastern music and tradition. His festival performances including this year’s Primavera Sound in Spain has seen appreciation for his well-crafted, hectic and - at times - intense music grow and transcend not only language, but cultural barriers.

Recorded in Brooklyn primarily live in the studio, 'Wenu Wenu' distils Omar's enthralling live performances into a fury of ascending and descending techno scales punctuated by his iconic voice.