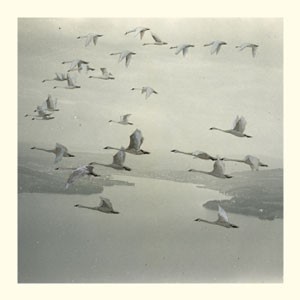 Snow Ghosts is the collaboration between Throwing Snow and recent Phaeleh collaborator Augustus Ghost. Following the recent release of debut album ‘A Small Murmuration’, they’ve been The Guardian’s New Band Of The Day and Zane Lowe’s Next Hype, and have played a live acoustic session on Dermot O’Leary’s BBC Radio 2 show.

‘And The World Was Gone’ pins a sense of unease to an acoustic guitar riff, cello and Augustus Ghost’s most affecting vocal. Remixes come from Roly Porter (one half of bass duo Vex’d), who brings out the track’s darkness, whilst D&B maestro Calibre emphasises the melancholy in its melody. Finally, in-demand Bristol producer Kahn provides the most arresting cover version imaginable.

The 12” is cut to heavyweight 180g vinyl by mastering engineer of the year, Matt Colton.