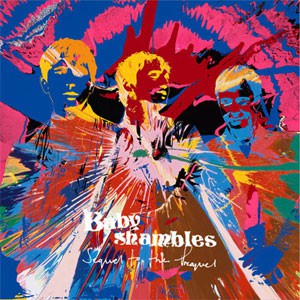 Parlophone are thrilled to announce that the third Babyshambles album Sequel To The Prequel. The album was recorded at Question Du Son, Paris and mixed in The Bunker, London, with producer/mixer and long time 'Shambles collaborator Stephen Street.

Filled with hooks and humour, the album features some of the band’s finest ever lyrics ranging from the tender to the downright hilarious. Musically it has already been called their most accomplished and collaborative work to date.

As Peter Doherty told the NME recently, “I don’t want this to be half arsed, I want to get up there and really fu*king smash it out. Babyshambles aren’t back, this band has always been here”.

The album - featuring sleeve artwork by Brit-art icon Damien Hirst - is released on CD, and on heavyweight 12" clear vinyl LP (including a CD of the album, plus artwork poster).

Andy says: Proper songs and a solid production make this a surprisingly coherent effort from the erstwhile Libertines man.