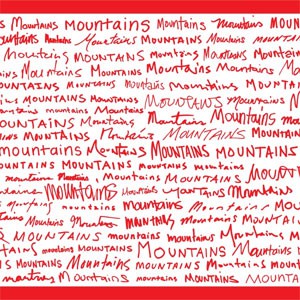 Thrill Jockey are happy to re-issue the album in a limited edition of 1,000 copies with different artwork (an inverted colour scheme from the original) pressed on high quality virgin vinyl with a download coupon for the first time.

This re-issue follows the band’s latest album ‘Centralia’ (released in January of this year to critical acclaim). The band toured the US and Europe this year in support.

Koen Holtkamp describes ‘Mountains Mountains Mountains’ thusly: “One thing that strikes me on listening back 5 or so years later is both how different and similar it sounds to what we are currently doing. While these pieces are clearly more minimal and intimate on some level and our technical approach has changed somewhat, the dynamics between the acoustic and electronic elements remain fairly consistent throughout our releases. Which is something we’ve been engaged with from the beginning and part of what defines us as a band.”

The record’s artwork mirrors the band’s ability to create music that encourages personal revelation through universal consciousness: “We made sign up sheets with instructions for people to right the word Mountains which we had by the door at a few of our shows and left in a couple record stores in NY. Each ‘signature’ is in a unique handwriting by a different person, but all writing the same word.”