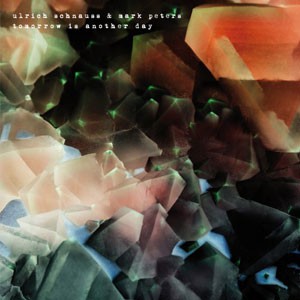 Electronic duo Ulrich Schnauss (A Long Way to Fall, A Strangely Isolated Place) and Mark Peters (of the band Engineers) return with a second collaborative album titled Tomorrow is Another Day, released by Bureau B. This second project offers a sublime exploration into their signature expressionistic landscapes while exploring the potential of a collaborative model in which Schnauss's keyboards and Peters's guitar work together in juxtaposition.

Ulrich Schnauss, born in the industrial port town of Kiel in northern Germany in 1977, emerged in Berlin's drum 'n bass scene in the mid-1990s. Mark Peters was born in Liverpool in 1975 and embraced a deeply euphonic pop aesthetic that incorporated intricate formal structures. The two musicians met years ago when both were making shoegaze music and formed a close friendship. Schnauss joined Peters's band Engineers as a keyboardist in 2010. After the collapse of the second-wave shoegaze movement in the early 2000s, both musicians drifted away from the genre's dreamy, shimmering aesthetic and returned solidly to their own musical roots. Peters has subsequently explored classic, guitar-based music and Schnauss has returned to his origins as an electronica producer.

Tomorrow is Another Day represents a maturing of the pair's creative process. Following their first collaborative album titled Underrated Silence (2012), which seamlessly blends the two instrumental voices into an integrated sonic landscape that delivers surprisingly intense emotion beneath the surface of its delicate composition, Schnauss and Peters subsequently began to craft a musical exchange in which each musician's contribution was emphasized in contrast to the other's voice. The differences in Schnauss' and Peters's musical backgrounds are highlighted and embraced as their two voices emerge in dialogue. Here, the synths are drier, the guitars more discreet. The shifting tonality of the music's richly layered patterning defines its composition with punctuated gestures as melodic lines emerge in sharper relief. With neither musical style overpowering the other, the effect is that of two equally masterful voices in coherent conversation, celebrating the dynamic nature of instrumental combination and exploring a new method of creative approach - one that allows for concurrence and dissent, in turn.