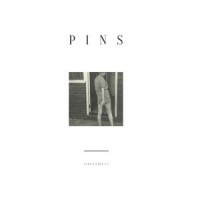 To say there’s excitement for Girls Like Us, the storming debut album by fiery Manchester four-piece PINS, would be an understatement. Even before the rousing reception to their oscillating, reverb-drenched EP LuvU4Lyfon Bella Union last autumn, first shows in disused office blocks and hotel basements left barely an inch of elbow room whilst an uber-limited gold cassette single released on their own Haus of Pins label flew off the shelves quicker than a hipster uploading an Instagram snap.

Thankfully, for PINS complacency is not an option. Thick as thieves, this is a girl gang who’ve since battled line up changes, taken on European terrain, and scoffed in the face of supposed Armageddon by hosting their own swansong gig in a warehouse. Akin to cult 60s novel/70s film The Warriors, PINS are true fighters; a taut rebel unit living out their own manifesto and defending their turf as purveyors of brooding guitar pop.

Take album opener ‘It’s On’, a song resurrected by bassist Anna from singer and guitarist Faith’s back catalogue of home-recordings. “It’s strong and we wanted to kick off the album by letting listeners know that we are ready for a fight if they want to take us on,” says Faith. She’s not kidding. From start to finish powerful bass lines blow up like smoke bombs whilst woozy, echoing guitars and tribal Banshee style 4-piece backing vocals strike in unison with the numbing blunt force of a nunchuck. Creating an air of noirish suspense, ‘Get With Me’ is decadent like blood red velour, freewheeling with the drive and menace of a Tarantino surf style soundtrack whilst ‘Lost Lost Lost’s echoing monotones induce chills like a PJ Harvey mantra. Completing the line-up, new recruit Sophie’s military drumbeats thunder through the unnerving ‘I Want It All’ and ‘Mad For You’s sprawling duel toms give the record its urgency. It’s seductive and switched on; never giving into what outsiders would expect it to be.

Purists at heart, PINS recorded the album as live at Liverpool’s Parr Street Studios for its vast selection of analogue gear; it was self-produced and nailed within a week. Such is the understanding of and dedication to their girl gang feel, PINS even learned guitar parts backwards and brought in found sounds to give Girls Like Us its desired effect. The pitch and tempo of ‘Play With Fire’ was manipulated to make it sound like warped vinyl whilst Sophie covered her floor toms with tea towels to give the relentless beatific rhythms a distinctive boxy sound. The footsteps at the beginning of ‘Howlin’’ is the sound of Faith walking from the control room to the vocal booth.

“Girls Like Us isn't about being like us, it's about being yourself,” clarifies Faith. “I always wanted to be in a band, ever since I can remember, it's all I’ve ever wanted to do to... our album may have been recorded and mixed in a week but it’s been dreamed about for years! We had to be ruthless but we've got each other’s backs, we don't let each other make bad decisions.”

Comparisons to other gangs (of New York) Vivian Girls and Crystal Stilts will be inevitable, yet PINS’ femme fatale extends far beyond that of C86 tribute. Here seemingly straightforward guitar pop is choked with atmosphere created by group chants a la The Shop Assistants and the abrasive sonic experimentation of Jesus and Mary Chain. Take ‘Velvet Morning’ - a moment of calm midst the storm with Anna’s alluring vocals telling a story written by ex-drummer Lara before her premature departure. “Having Lara with us from the start was integral to us finding our sound and our confidence as musicians” they explain. “We’ll love her forever.”