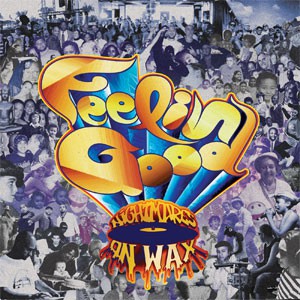 Nightmares On Wax returns after a five-year absence with ‘Feelin’ Good’, an eclectic collection of playful, sun-soaked tracks that sees Warp Records’ longest-serving artist George Evelyn at his most joyful and musically ambitious.

Having grown up in Leeds, George Evelyn decided to pack his bags and move over to Ibiza seven years ago, and this drastic change in both lifestyle and climate is more evident than ever on this new album. “It was always a natural dream to make music in the sun like I do now,” Evelyn said.

While every Nightmares On Wax release draws from a staggering number of influences, ‘Feelin’ Good’ relates very closely to Evelyn’s own Ibiza club night, Wax Da Jam, where he soundtracks a night of groove, experimentation, percussion and improvisation, featuring guests such as DJ Shadow and Roots Manuva. Evelyn explains: “It’s been pivotal to my music making... everyone turns up as individuals but everybody leaves as one.” Listening to ‘Feelin’ Good’, you can feel the same euphoric, positive vibes seeping through the music, providing the perfect soundtrack to a blissful Ibizan sunrise.

Evelyn recruited a truly virtuosic line-up of musicians for the recording of ‘Feelin’ Good’. With orchestrations and strings by Jazzanova arranger Sebastian Studnitzky, drums by the masterful German jazz percussionist Wolfgang Haffner and a vocal feature from Mozez of Zero 7 fame, this album is full to the brim with undeniable talent.