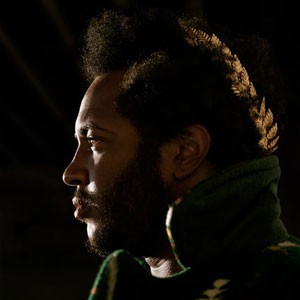 Forever a wildcat and wild card, Los Angeles’ bassist / songwriter / vocalist Stephen Bruner, aka Thundercat, is impossible to tame artistically. A true master of his craft, he can be found playing bass with Flying Lotus, Erykah Badu and Suicidal Tendencies, in the same breath as performing live with the likes of Stanley Clarke, Snoop Dogg or the Red Hot Chili Peppers. His 2011 solo debut ('The Golden Age of Apocalypse', co-produced by Flying Lotus) created an equally genre-blurring enigma of indie rock and jazz, with a touch of electronica.

On his second album, 'Apocalypse', Thundercat pairs up with executive producer Flying Lotus to pull the veil back and reveal the simple truths of the cycle of life, for all its beauty and destruction. An album about loss and rebuilding, trying to gain something back, and capturing that moment of clarity where one finally finds feet back on the ground again. Bringing a fusion of pop, soul, electronica, prog rock and funk into an unexplored dimension, the album slowly descends and tunnels to the core of what it takes to grasp peace, at a time that it seems most far.

From the deep, rumbling entrance of ‘Tenfold,’ each of the 12 tracks coalesce with Thundercat’s signature bass, his riffs and basslines gliding sky high to meet Fly Lo’s astral touch. Bruner’s vocals and harmonies also soar with open honesty, rising above heartbreak with uplifting odes to love and companionship (‘Tron Song’) and wise mantras to live by (‘Special Stage’). The album plays as a comedy and tragedy at the same time, delicately addressing tracks like ‘We’ll Die’ while bringing the all-out cosmic funk of the anthemic ‘Oh Sheit, it’s X.’

As heavy as the lyrical weight may be, the divine musicality of Flying Lotus, and Thundercat’s instrumental collaborations, brings light. Navigating dense rhythms and intense harmonic progressions, the LP pushes through the hypnotic strands of ‘The Life Aquatic,’ the analogue explorations of ‘Lotus & The Jondy’ (recorded in Adrian Younge’s studio with drummer Thomas Pridgen), and Thundercat and Lotus’ prog rock jam ‘Seven,’ a spontaneous improv recording that organically materialized in less than an hour. It’s no wonder the kindred pair often refer to their freeform sessions as “going to space.” Continually pushing tracks to their furthest point, they take the listener to another place completely – somewhere beyond time, a place that transcends this realm. As the aforementioned track ‘Seven’ (named for its challenging time signature) asks, “Can you hear the sounds of infinity?”