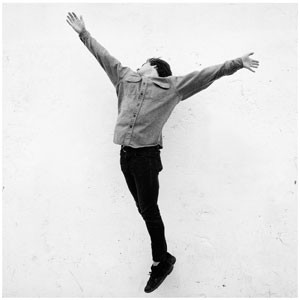 MONEY release their debut album The Shadow of Heaven on 26th August via Bella Union Records. Recorded in London through the deep, dark winter of 2012/13, it’s an ethereal, transcendent record that’s notable for its musical and intellectual ambition. Though ambition is perhaps not quite the right word. Because MONEY would never talk about ambition. Such things don’t sit well with them. They’d talk about anti-ambition and the revision of existing values — the kind of bold gesture already signalled by their unabashedly iconic name. It’s an album that defies convention and cliché, asking us instead to be courageous enough to see the world in different ways. As lead singer and ideologue Jamie Lee says, ‘Our aim with this band — in all things we do — is to create the world afresh on our own terms.’

MONEY are Jamie Lee, Charlie Cocksedge, Billy Byron and Scott Beaman. Having formed in Manchester amidst a prolific underground milieu, they soon came to embody the passion, creativity and optimism of a new generation of artists and musicians who found themselves presented with what Jamie describes as ‘an extraordinary, poetic city’. MONEY played shows in esoteric venues such as Salford's Sacred Trinity Church and ‘the Bunker', a former factory near Strangeways Prison and home to the cult independent label SWAYS, who released the band’s debut 7” single, ‘Who’s Going to Love You Now’ / ‘Goodnight London’ to wide acclaim. Having been tracked down by Simon Raymonde, the band subsequently signed to Bella Union, headlining the label's Christmas party at the Union Chapel before taking to the studio to record 'The Shadow of Heaven'.

The album consists of ten songs that range from stripped-back piano ballads such as ‘Goodnight London’ and ‘The Cruelty of Godliness’ to the more epic ‘Hold Me Forever’ and ‘Bluebell Fields’. Rooted in universal themes of the spirit, love and loss, the album also addresses man’s condition in the modern world, issues ‘such as isolation and mental health as logical reactions to it', says Jamie. It’s an album full of yearning and soul-searching, a voyage of (non-) discovery that only ends up finding itself and the sheer, aching beauty of questions asked in full knowledge of their own answerlessness. It’s metaphysics for the modern age, which might not be quite as spiritually bankrupt and bereft of meaning as we once believed.

Andy says: There's always been a buzz around this band. This passionate debut album totally justifies it. Today: Piccadilly Records, tomorrow The World?!