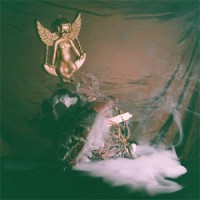 Re-release of the classic Ghost Outfit album at a bargain price following the release of their second album last year..

Combining an appreciation for late 80s- early 90s bands The Cure, My Bloody Valentine, Throbbing Gristle and Sonic Youth, with the modern omnivorous approach of bands such as No Age or Deerhunter the unexpected, unconventional quality of the album is only further enhanced.

"an album of sheer unrelenting force. It skyrockets from the off" - thisisfakediy.

Andy says: Doomy, heavy, but always in an inspiring way, this is a clever, powerful debut that could well take Ghost Outfit far.