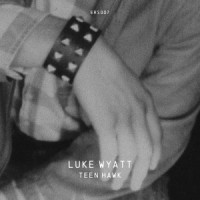 As one of the rising stars of the East Coast US electronic scene, Luke’s Torn Hawk releases on the cult L.I.E.S records introduced his cut up and glitchy take on R&B and house that have recently edged deeper and darker in to the noise and techno realms associated with the likes of Demdike Stare and Regis.

This has been complimented by two recent DVDs, self-released under his own name. Mixing his day as a professional multi-media artist with his night as an increasingly experimental musician, they have gained considerable acclaim that can’t be pigeon holed as yet another Brooklyn house-head.

However, as his first white label debut EP testified, there is also an ethereal and at times (*cough*) Balearic feel buried deep within this music and it is here, on 'Teen Hawk', this is as evident as his drone-based pieces.

While the looping percussion and rhythms of 'Bertone Stratos' and 'I Recommend Starman' echo the ethereal beauty of Cluster and La Dusseldorf, they are also mixed with the darker ambient and loop-based 'Wrong Crowd' or 'Greystoke One'.

Riding throughout much of this is his beloved looped guitar and eye for a breakbeat. Never more evident that on the album closer, 'Time For Thick'. Here his influences mesh to create a swirling, blissed out, hip-hop meets Aphex MDMA anthem (minus the sexist gangster rap - phew!)