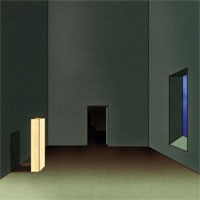 Warp Records are pleased to announce the release of Oneohtrix Point Never's 'R Plus Seven'. The album contains many familiar sonic touchstones for listeners who have followed the acclaimed electronic music composer’s development over the last half-decade, his Warp Records debut is a major departure from his previous work. Lopatin’s experimental inclinations lurk behind the scenes - in the concepts and procedures he adopted to create the tracks - while the music itself comes as close as he's has ever got to anything resembling traditional song structure. Which, for the producer, is only so close: The work is full of overlapping, abstract musical through-lines, puzzle-like pieces that, taken together, might allow you to glimpse an overarching tableau.

The Brooklyn-based artist has always deftly balanced the experimental with the accessible: He has released several albums under his Oneohtrix Point Never moniker on various independent labels - including the 2013 3-CD/5 LP 'Rifts', a compilation of his early work - as well as amassing a large catalogue of mini-album tape releases. His most recent disc, 2011’s 'Replica', was built around samples of television commercials.

OPN has built live soundscapes at the Museum of Modern Art; collaborated with Montreal-based ambient electronic music composer Tim Hecker on the largely improvised 2012 'Instrumental Tourist'; and recast the title track from his 2010 disc 'Returnal' as an elegant and emotive piece for piano, featuring the otherworldly voice of Antony Hegarty. Advertising powerhouse Saatchi & Saatchi tapped Lopatin for an installation event at the 2012 Cannes film fest and Sofia Coppola’s longtime cohort Brian Reitzell invited him to create original music for Coppola’s The Bling Ring.

'R Plus Seven' is disruptive and hypnotic in equal measure, and the fun of it lies in trusting Lopatin as he guides you past - and often through - its succession of walls and mirrors.