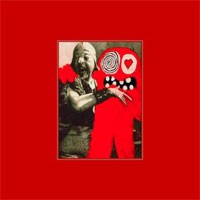 The impeccably named Scott & Charlene’s Wedding are back with not so much a brand new album, as a generation's glimpse of love, home-sickness, basketball, alienation, rock and roll and all things that matter to an expatriate Aussie stranded in New York. Any Port In A Storm is fated to become your essential backdrop to the summer of 2013.

The brainchild of the amiable and unashamedly charismatic Craig Dermody, Scott & Charlene’s Wedding offer a sonically charged take on the Lemonheads’ ramshackle melodicism and Pavement’s lo-fi drawl. Following the success of Critical Heights' recent reissues of the band’s debut album Para Vista Social Club and the follow-up EP Two Weeks, the new album sees their first new recordings for over two years capturing Dermody at a pivotal time in his life. He has further developed his gloriously ragged anthems to reach new heights of nonchalant perfection.

Having uprooted from Melbourne, Australia to New York, New York, the Big Apple has replaced Melbourne as inspiration his latest trials and tribulations. His heart-on-sleeve lyrics reveal tales of everyday Dermody life, somehow more absurdly unhinged, humorous and poignant than the lives of his peers. All coming from a man with a clear mission to update the rock’n’roll template beyond his inspirations and influences as Scott & Charlene's Wedding effortlessly sprawl across the generations, linking the vintage swagger of the Velvets to the off-kilter pop perfection of the Only Ones by way of the Stooges and Television. The eleven electrifying tracks taking us on an intimate journey with Craig Dermody and his daily struggles, like a peak in to his personal diary.

He documents his move from Melbourne to New York to follow a girl. ‘Fakin NYC’ sees him adjusting to life in a new city, having to find a new job and feeling out of place as a security guard for a trendy bar. ‘Lesbian Wife’ sees him being caught in the middle of the biggest storm ever to have hit NYC and feeling homesick for Australia.

"... the execution for his frustration is point perfect-- his sleepily conversational vocals fold into his sunny, jangling guitars seamlessly" Pitchfork.